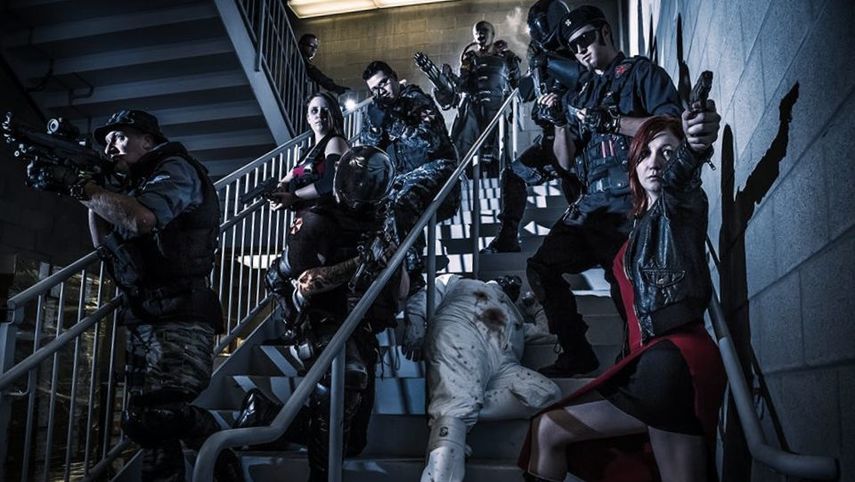 happy new year from umbrella!
though we still do not have any events coming up
due to the covid-19 pandemic, we will continue to
keep our website and social media updated, so be sure
to check us out on Twitter, instagram, youtube, and more,
​@azhive

during this time of quarantine due to the covid-19
pandemic, the umbrella corporation arizona hive
will not be attending any public events in-person,
​in order to maintain safety and proper health
standards. we appreciate your understanding!
​please be safe and wash your hands!

happy new year from the arizona hive!
many great adventures lay before us, old and new,
but all will be the genesis of a great 2020 ahead!
as always, we thank you for your support!
check out our events tab to see what's coming soon!

our busiest month of the year has arrived, and we are
definitely busy! our haunted zombie house extravaganza,
slaughterhouse, our first out of state california con,
darkside in riverside, and so much more, we are busy, and
we couldn't be happier! stay tuned for more updates!

Another phoenix con has come to an end, this year being phoenix fan fusion.
a very successful one to boot, with our biggest panel turnout ever,
and most profitable raffle of all time! so many more great things lie ahead,
so stay tuned, we have pictures and so much more coming soon!
thank you so much fan fusion for having us again, and for all of your generosity!

the month of january is finally getting exciting for the
arizona hive. kicking off this weekend with a toys for tots
charity event in tucson, followed by a very busy week
coming up, all dedicated to the newly released video game,
the resident evil 2 remake, which we will be promoting at
gamestop, and then after tempe fancon at the library, we
will be having a twitch stream of the new game! 2019, here
​we come! see you all soon with more announcements!

the arizona hive has recently become a proud
affiliate and supporter of an amazing company,
who is now a gracious sponsor: tactical gear junkie,
an excellent provider of military style gear, apparel,
and most of all, custom made patches! check them out
on their website at tacticalgearjunkie.com and use
the code "azhive" for 10% off your purchase!

umbrella has had another fun 2nd friday, and has
successfully helped the payson monster walk to
a memorable event, as well as a successful slaughterhouse
thus far. we have a twitch stream ahead, as well as
tucson comicon. we're busy, but not busy enough to tell
you all about a great deal we are now a part of!
see our post above to read all about it!

It's almost time for halloween ! our season at the
tucson slaughterhouse has begun. not only that, but
we have a great time coming up in payson this October!
best of all, our founding commander, Donald pease, has
begun his promotion of his long labor of love, an original
card game called 'bruised egos'. check out their
facebook page at this link, and show your support:
​https://www.facebook.com/BruisedEgosGaming/

A great few months lie ahead, as the hive gears up
for our third game on expo in downtown phoenix, and
is excited for alot more events coming, including one
of our biggest of the year, tucson comicon! see you all
​at game on expo this weekend!

another phoenix comic fest has come and gone, with
the umbrella corporation arizona hive making a good
profit to donate to the animal welfare league! many
​more events coming this year, so stay tuned!

The umbrella corporation arizona hive gets the privilege
of once again attending the growing sensation, tempe library
comicon! it's a free event, so come see us! we will have a booth
and will be promoting a worthy event that's getting better
​and better every single year!

this october and november we've had quite a few fun times,
and many more to come! from our halloween 2nd friday in
downtown mesa, to tucson comicon, we've been busy, and
fan fest to top it all off, we look forward to the future!

Umbrella has made a couple big accomplishments!
First of all, we have a twitch channel now! We kicked
it off with a stream to raise money to help a family who
lost their daughter. next, we will be attending the
game on expo this weekend, august 11th-13th! see you there!

Another phoenix comicon has come and gone, a big success it was indeed!
we raised a good amount of money for the AAWL, and had alot of fun!
we even got to host a panel, jeopardy: horror edition, with the audience
competing for some very fun prizes! can't wait till next year!

umbrella now has a new event under its belt, and it was a big success!
the geek day at the phoenix film Festival was very profitable for umbrella,
from meeting new friends, watching independent film maker interviews,
to selling our zombie related wares! can't wait till next year!

after a couple years being absent from this event, Umbrella
has returned to Geek's night out, to participate in the fun!
Thanks to everyone who came to the tempe public library and
history museum to enjoy the many interesting booths!

UmbrellA has kicked off our 2017 with a bang! After some successful promoting
for Sony and the marketing team for the final resident evil film, umbrella had
the opportunity to serve harkins imax for premiere night, and then attend the
fun and relaxed tempe library comicon, in tempe arizona. many more good times
​ahead, so stay tuned!

This november, we kicked things off with Tucson comicon, and we
have much more planned ahead, starting with being at 2nd friday in
downtown mesa, this friday starting at 6:00 pm, stay tuned for more!

This october is going to be a busy one for the umbrella corporation,
with events ranging from the tucson slaughterhouse, to fan fest,
to the return of the downtown phoenix zombie walk, this month of
scares is sure to be our most eventful! So stay tuned!

this year we will be joining forces with the department of zombie defense (dozd)
to take down the zombie horde! come join in the fun at our booth for some
zombie shooting action this phoenix comicon! we'll have a zombie shooting maze,
a photo area, the works! all proceeds go to the "kids need to read" charity!

Please come join the umbrella corporation for free comic book day
located at heroes and villians comic book store in tuscon
Photo ops and comic book activities will be held,
but we can't promise that there won't be any t-virus leaks

first event of 2016! a free one day event to support
the young minds of tempe and their reading and imaginations.
come see the hive at tempe public library comicon 2016!
it's free, its one day, and there's lots of fun to be had!

the umbrella corporation will be patrolling the halls
of Tucson's comicon 2015 this weekend, so be sure to come
and join our fun! we'll have a special raffle held Saturday,
where you can get an entry just by donating a kid
friendly comic book! see you there!

The Hive will be patrolling at the upcoming Game on expo
at the downtown mesa convention center, so come see us,
as this is one of the biggest gamer events in Arizona,
and what better place for resident evil cosplay?

Mission successful, We made enough money at
this second Friday to help purchase a wheelchair
for a dog who had his hind legs paralyzed.
pictures to come

One Green Planet has written an article about the
amazing no-kill animal shelters around the USA.
Check out number 9 here!

We have our first Star Cosplay endorser!
Everyone check out Angelica Danger Dawn.

Several new galleries have been added to the public sector.
View them here.

Tucson Comic Con was an amazing success.
Umbrella will be thrilled to return again next year.
See more here.

Downtown Zombie Walk went off without a hitch!
Umbrella has kept the world safe for another day.
Check out the details here.

Visited the AAWL and dropped off some donations!
Check out all the pics here.

Come check out our new Tumblr!
Powered by